Stay at home – and do your home exercise program

While it’s outside of the scope of my practice as a sports physio to prescribe medication, as rehabilitation and pain specialists, physiotherapists regularly prescribe exercise to maximise recovery for our patients.

But why do physiotherapists do that? Aren’t they supposed to take care of everything during the consultation at the clinic?

Compliance with home exercises throughout a patient’s rehab is one of the most important indicators of rehab success. Many patients find it hard to stay consistent with a home exercise program because of their work, family, and school commitments.

But now that we’re all at home, there’s plenty of time to make sure we’re all doing what we need to in order to recover from those injuries.

Why are home exercises so important?

Creating a bespoke home exercise program (HEP) to patients is one of the fundamental aspects of great physiotherapy. Research has shown that patients who follow their prescribed exercises are significantly better at achieving their goals and demonstrate a greater increase in physical function.1

Exercise at home is designed by your physio to continue the progress made at the clinic. By working on things like increasing your flexibility and stamina at home, home exercise programs allow you to increase function and improve muscle memory so that progress is actually gained instead of lost between visits.

To recover from an injury, developing an exercise routine is one of the most important things you can do.

Here are just a few reasons why sticking to your physio created HEP is important:

How often do you do your homework?

If you answered rarely, you’re like most Australians.  Research shows that up to 65% of people don’t complete their home exercise programs! Instead of detention though, it could be long term pain or lack of movement you’re risking.

While our in-clinic treatment is designed to decrease pain and improve mobility, without strengthening or improving flexibility consistently, your condition won’t improve.

Your Fixio home exercise program is personalised for your needs

When our Fixio physiotherapists implement a home exercise program for you, the exercises are tailored to each individual. Even when two people have the same injury, the requirements of each person’s body is different and is influenced by their individual history.

For example, two people with the same rotator cuff injury may not have the same HEP due to a previous injury or muscular impairment. Individual history like this dictates the type of exercises– whether they are stretches, strength training or endurance training.

With a personalised approach, patients enjoy quicker recovery times and reduced chances of recurrence. As you gradually recover, your Fixio physio will assess your HEP and increase or change your program with your tolerance, so that your pain does not increase.

At Fixio Physiotherapy, your sports physio or musculoskeletal physio will work closely with you to provide a repeatable, realistic and trackable home exercise program.  Whether you want to spend 10 minutes a day through to hours on end, your physiotherapist will develop a home exercise program that is not only beneficial but realistic to complete.

If you have any questions about your home exercise program and what it contributes to your recovery talk to your physio. Education and understanding are crucial to making sure your experience throughout recovery is positive and effective. Call us today or book online for a consultation to ensure you are doing the best exercises as part of your rehabilitation.

The Achilles tendon is the longest tendon in the body, connecting the heel bone to the calf muscles.

Characterised by pain and inflammation of the Achilles tendon or its covering, Achilles Tendinopathy is an overuse injury that is most common in joggers, jumpers and other activities that require repetitive actions. This pain and stiffness is sometimes worse in the morning and at the start of exercise, and may disappear as you warm up. You may also notice the area is swollen and tender to touch.

The suffix ‘itis’ implies inflammation. Previously called ‘tendinitis’ or ‘tendinosis’, physios have moved on from these terms as modern science has proven that inflammation is not the driving force in tendon overuse injuries. So taking anti-inflammatories for your tendinopathy may not have great long term relief.

Common causes of Achilles tendinopathy include:

The dreaded ‘snapped’ Achilles tendon. The mere thought of it brings a tear to the eye.

68% of all acute Achilles tendon ruptures occur during some form of athletic activity.[1] Eccentric movements put an enormous amount of stress on the tendon and stop-and-go sports like volleyball, basketball, soccer and squash are commonly involved.

If you have ruptured your Achilles tendon you will probably experience:

How can a physio help?

Achilles injuries do not usually get better on their own. They may feel a little bit better with rest, but once you start doing an aggravating activity again it will become painful. Continuing to do aggravating activities despite pain or dysfunction is a great way to prolong your recovery time.

The goals of physiotherapy are to treat any acute issues associated with your Achilles injury:

They will also look to identify predisposing factors, reduce pain and inflammation, and promote healing to restore the muscle and tendon.

Your physio will look to address the factors that caused the injury in the first place, to help reduce the risk of re-injury, commonly including:

Fixio will also provide you with a targeted tendon rehabilitation program to make your Achilles stronger and more flexible. Finally, we will provide you with advice regarding when and how you can return to sport and/or activity. It is important to follow this advice to prevent recurrence, or worsening, of the tendon injury. Rehabilitation can be frustratingly slow but with perseverance it will get better! 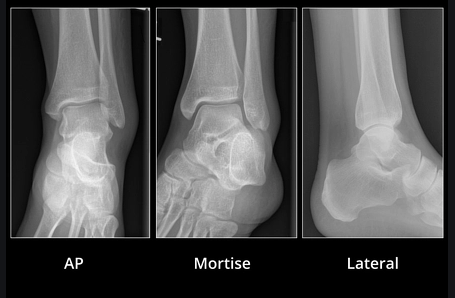 Ankle injuries: Do I need an x-ray?

Ankle injuries, particularly ankle sprains are among the most common injuries seen by sports physiotherapists. Especially on the Northern Beaches where people are out and about playing sports, running and generally doing things that put them at more risk of doing themselves a mischief.

So, you’ve just rolled your ankle down at the beach playing volleyball and it hurts like heck! What do you do?

Hundreds of thousands of people attend emergency rooms around the world with ankle injuries, usually sustained recreationally or in a simple fall. Most of the time, these people end up having a simple soft tissue injury or a small fracture of no clinical significance. With most people just going straight for the emergency room, they’re exposing themselves not just to the germs of the emergency ward, but also to x-ray radiation for possibly no benefit.

Ankle injuries make up around 5% of all patients who visit emergency rooms. Fewer than 15% of them will have a clinically significant fracture.[1] Some will have more serious fractures, requiring immobilisation or internal fixation, but there are more ways than one to determine whether you have a more serious injury of the ankle.

Are x-rays needed? Turn to the Ottawa rules

Ankle sprains cause pain, oedema, ecchymosis, and often make it impossible to bear weight without pain. Even though uncomplicated sprains usually heal with physio treatment, other ankle injuries may require a more surgical approach.

Differentiating between a simple and complicated injury is not always easy, particularly for relatively inexperienced physiotherapists. This is why a series of tests and rules have been developed to serve as guidelines for sports physios to diagnose ankle injuries and to determine the indications for radiography.[2]

The Ottawa foot and ankle rules are an evidence-based guide that helps determine the use of initial x-rays after acute ankle injury. The rules state:

An ankle X-Ray series is required if there is any pain in the malleolar zone and:

A foot X-Ray series is required if there is any pain the midfoot zone and:

In a recent review of 27 studies evaluating the implementation of the Ottawa ankle rules, a hit rate of almost 100% was found for the rules, with a possibility of reducing the number of unneeded x-rays by between 30–40%.[3] With a reliability of nearly 100%, the rules have also shown to diagnose and exclude ankle and foot fractures in children and young adults.[4]

Of course, the value of a normal x ray in providing reassurance and diagnosis of more serious injuries is still relevant. However, the Ottawa ankle rules provide a high level of diagnostic confidence in the absence of x-rays when considering treatment options and recommendations for return to activity.

If you have hurt your ankle, don’t waste any time in getting to your local sports or musculoskeletal physio ASAP. They will be able to take you through an in-depth physical assessment and likely determine the severity of your injury without clogging up emergency rooms and exposing yourself to radiation in the process.